I’m Yukko, a VISUAL TOKYO CULTURE editor who loves to travel! I will introduce you to Japan as I travel around the 47 prefectures of the country!

This time, we would like to introduce Kobe Franz, a confectionery store

Does it look like something out of a fairy tale? What is Kobe Franz’s “Magic Pot Pudding”?

Kobe Franz, located in Kobe City, Hyogo Prefecture, is a sweet brand originating from Kobe with an impressive logo featuring an anchor that evokes a port city. This time, we would like to introduce a very popular product from Kobe Franz, “Magical Pot Pudding”!

The No.1 ordered pudding in Japan! Kobe Magic Pot Pudding 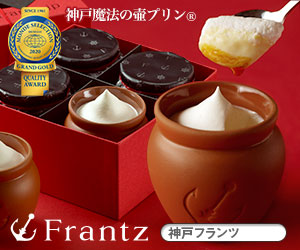 The “Magic Pot Pudding,” which is often introduced in the media, is a novel looking sweet that, as the name suggests, is a pudding in a “pot. When you open the wrapping paper, what catches your eye is the fluffy cream. 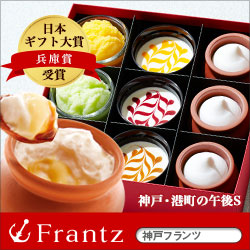 Of course, it is not only cute, but also has many achievements, such as winning first place in the nationwide ordered pudding ranking and the Hyogo Prize of the Japan Gift Award. That’s the power of selling out 25,000 puddings a day! The only physical stores are in Osaka and Kobe, but you can buy it from anywhere in Japan through their online store, so if you haven’t tried it yet, order some for yourself!